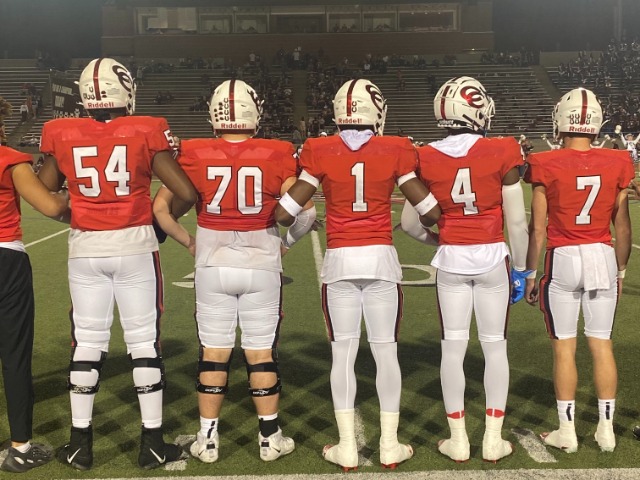 The Cowboys started off returning the opening kick off all the way to the 50 yard line resulting in a field goal by standout kicker Nick Radicic. The Cowboys defense started off just as hot causing Plano to punt on their first drive. Zack Darkoch was there to return the punt where he slips,recovers and finishes off by returning the punt all the way to the 50. Building off the dominance the Cowboys have shown, wide receivers Luca Grosoli and Zack Darkoch both made big plays from quarterback Jack Fishpaw, leading to another Cowboys field goal by Nick Radicic. The Cowboys defense continued just where they left off forcing Plano to punt again. The Cowboys offense continued the pressure highlighted by multiple play runs from running back Malkam Wallace, who finished the drive with a touchdown. Followed quickly by another Plano punt, the Cowboys continued their offensive prowess and scored yet another touchdown from wide receiver Sean Simpson. Quarterback Jack Fishpaw continued the offensive dominance in the second half with a long run and touchdown pass to Zack Darkoch. Next offensive possession, running back Blake Robbins has multiple big runs and secures yet another touchdown for the Coppell Cowboys. With the 34-7 victory, the Cowboys end their regular season 9-1 as they head to playoffs. Bi-District game next Friday, November 11th at HOME (Coppell Buddy Echols Field) versus McKinney at 7:00 pm.