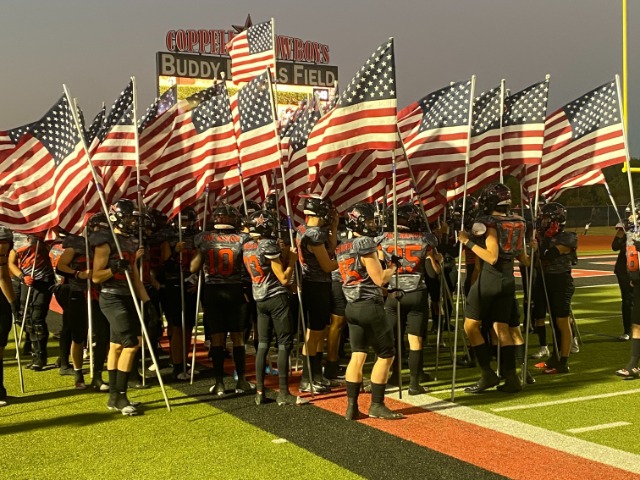 The Hebron Hawks began the game with two electric runs that brought them within the Cowboys 25 within the first plays of the game. The Cowboys, however, began to fire back and forced a turnover on downs. The Coppell Cowboys offense began with an explosive performance highlighted by a 25 yard reception by Luca Grosoli and two lengthy runs by Jack Fishpaw, with the possession resulting in a Malkam Wallace touchdown. Next offensive possession, the Cowboys continued their offensive momentum and drove down the field with ease, in which Ayrion Sneed received a large pass by Jack Fishpaw and Blake Robbins capitalized on multiple runs, leading to Zack Darkoch touchdown reception. The Cowboys defense found their rhythm forcing the Hawks to punt. The Cowboys continued to display their dominance offensively with a reception from Luca Grosoli, ultimately resulting in a rushing touchdown by Jack Fishpaw. Hebron capitalized on an interception and scored a touchdown. Hebron, however, missed the extra point, allowing Ikenna Odimegwu to recover the fumble and score two points for the Cowboys. A great plan call followed in which Zack Darkoch threw a touchdown pass toCarter Kincaid for 50 yards. The half ended with an intercepted by Weston Polk. Hebron began the 2nd half with an onside kick, which was recovered by the Coppell Cowboys. The Cowboys utilized the shortened field position to drive down the field ending with a Malkam Wallace touchdown. Jake Logsdon forced a fumble recovered which lead to a Cowboys field goal by Nicolas Radicic. The Hebron Hawks score two consecutive touchdowns but to no avail, with a final score of 43-35 and another Coppell Cowboys victory. Cowboys are now 7-1.