TOUGH NIGHT FOR THE COPPELL COWBOYS AT LEWISVILLE 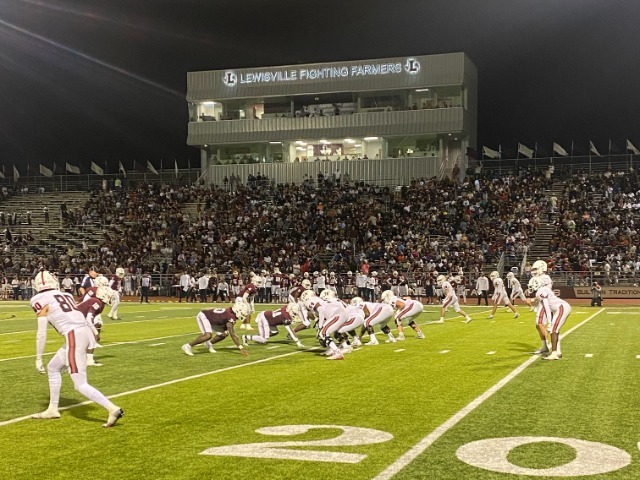 The Cowboys begin with an electrifying start, as Gabe Warren sacked the Fighting Farmer’s QB on the first possession of the game. Despite a dominant first play by the Cowboys, the Cowboys were unable to contain the Farmer’s run scheme, resulting in a touchdown for the Farmers early within the game. The cowboys answered with a nice catch by Luca Grosoli, but ended the offensive possession punting the ball away. After Nick Radicic punted the ball to the Farmers and with yet another tackle for loss by Gabe Warren, the Cowboys gave up another touchdown to the dominant run scheme of the Farmers. The Cowboys bounce back on offense, with multiple completions to Luca Grosoli and Zack Darkoch, but do not have anything to show for this effort as the drive results in another punt. Momentum moved in the cowboys favor off the interception by Braxton Myers. Unfortunately, the Cowboys are unable to capitalize on this opportunity, giving the Farmers the ball once more. The end of the half ends at 0-17. To start the second half, the Cowboys are able to string multiple large offensive plays, propelled by a lengthy run by QB Jack Fishpaw, and catches by Luca Grosoli and Carter Kincaid, which results in a field goal by Nick Radicic. The Farmers continue their offensive performance stretching the lead to 3-31. The Cowboys begin another drive highlighted another large run by Jack Fishpaw, yet again come up short of scoring. The final score of the game is 3-38 Lewisville.