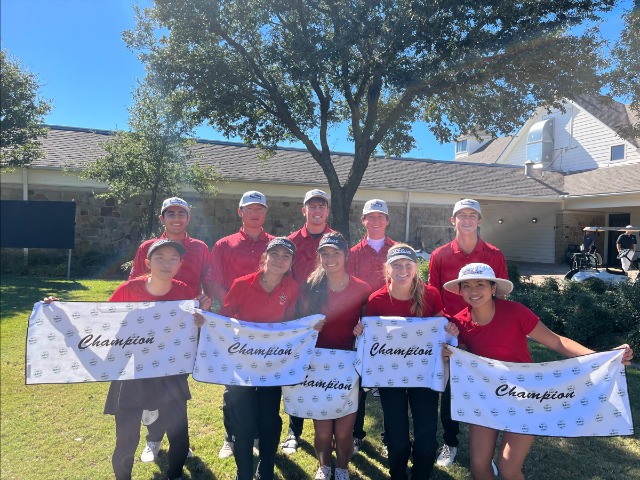 The Varsity Boys and Girls Golf Teams paired up this past weekend to win the Southlake 4 Ball Tournament at Tangle Ridge Golf Club. The tournament featured a best ball format where each member of the boys team was paired a member of the girls team and the best score between the two was taken for each hole. The top four scores for each pairing accounted for the team score.

On Day 1, the teams turned in 1 over par score of 289. Granger Hassmann and Kirstin Angosta led the team with a score of 69. Max Scott and Rylie Allison carded a 72. Rithvik Shroff and Lauren Rios turned in a score of 74, as did the pairing of Alex Ahn and Mia Gaboriau. Jake Garcia and Miyoko Tan scored a 75 as well.

Day 2 found the Cowboys and Cowgirls just 2 strokes ahead of tournament host Southlake Carroll. Improved weather conditions helped the Coppell teams score significantly better than on day 1. Granger Hassmann and Kirstin Angosta again led the teams with a score of 68. Lauren Rios and Rithvik Shroff turned in a score of 69, as did Max Scott and Rylie Allison. Alex Ahn and Mia Gaboriau carded a score of 70. As team the Coppell golfers shot a combined score of 12 under par total of 276. Jake Garcia and Miyoko Tan turned in a combined score of 80.

The Coppell team held off Southlake Carroll to win the tournament championship by four strokes.

Both the Varsity Boys and Girls will be in action again on November 12 & 13, returning to Tangle Ridge G.C. to compete in the Texas Two Step tournament.