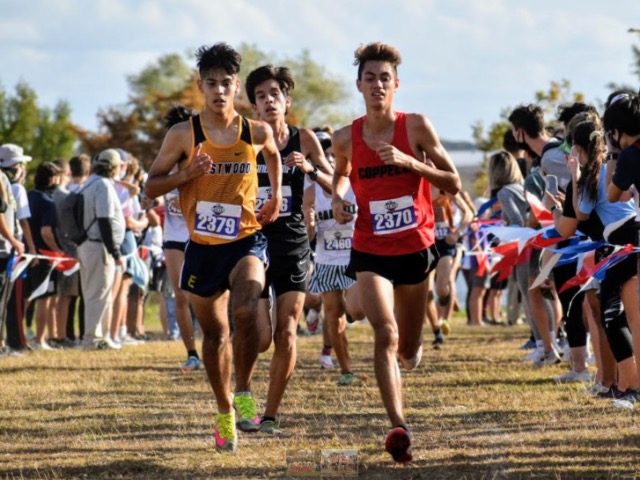 The Coppell Boys’ cross country team had the drive, determination, and heart to compete with the best in Texas during a truly unique time in American history. The Cowboys took fifth place in the UIL 6A State Championship at Old Settlers Park in Round Rock on Tuesday, November 24.
It has been a year where teams have been thankful to compete in small practice size meets during the regular season. From this the Coppell boys moved on to the championship portion of the season and made a bold statement by winning the District 6-6A team title. At the Region 1-6A Championship the Coppell boys snatched third place in the biggest race of the season. The State Championship was one last test of their resolve. The Cowboys’ repeat appearance at the State Championship highlighted a program achievement that showcases a seventh place team finish in 2019 that improved to a fifth place team finish in 2020.
Coppell finished fifth with a team score of 137; following Southlake Carroll (78), El Paso Eastwood (84), The Woodlands (99), and Humble Atascocita (113). There were twelve teams competing in the State Championship as well as individual qualifiers for a total of 120 competitors on the course.
Senior Evan Caswell led his cowboys one last time. He finished eighth overall with a time of fifteen minutes, 35.18 seconds. Evan wraps up his high school cross country career with three consecutive State Championship appearances, 2020 Region 1-6A individual champion, 2019 Region 1-6A runner-up, 2020 & 2019 District 6-6A individual champion, and a couple of CHS school records.
Sophomore Andrew Mullen was the next to cross the finish for Coppell. He finished 25th overall with a time of 15 minutes, 58.4 seconds. Seniors Rith Bhattacharyya (49th, 16:19.3) and Colin Proctor (50th, 16:19.9) finished the season side by side. Once again, they showed the underclassman how to fight through the exhaustion and finish strong. Sophomore Blaine Warner (85th, 16:50) rounded out the point scorers. Sophomores Kavin Chengavarayan (17:19) and Vedant Bhattacharyya (18:11) also competed for Coppell.
Head Coach Nick Benton is extremely proud of the boys for representing Coppell at the State Championship two years in a row. He also pointed out that the Coppell cross country program has had a team compete at State for the past five years. “It is truly amazing to coach a group of young men with such high standards for themselves and each other,” said Coach Benton. “Not to mention exciting that they are continuing and maintaining a standard of being a state ranked team.” The entire distance team will now move into the off-season. However, they will continue to train. Consistency is important in distance running and the 2021 track season is right around the corner.