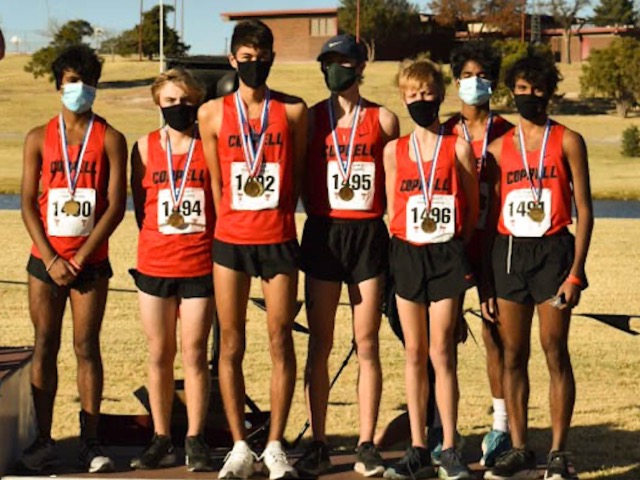 The Coppell Boys Cross Country team proved their relentless desire to fight “through any conditions” on Tuesday, November 10. The Region I-6A Championship was held on the 5K course at Mae Simmons Park in Lubbock. Qualifying for the State Championship as a team is always challenging in Region I-6A, COVID concerns just added to the intensity of the race. UIL announced this summer each region will only advance three teams instead of four to the 2020 State Championship in an effort to reduce the spread of COVID-19. Once again, Coppell needed every team member to play a role in fighting for a State Qualifying team finish.
The Coppell Cowboys qualified for the state championship by finishing third with a score of 101. The Cowboys were beat by Southlake Carroll (61), El Paso Eastwood (64), and closely followed by El Paso Americas (109).
Senior Evan Caswell led the charge with a decisive first-place finish. He was the individual Region I-6A champion with a time of 15 minutes, 45.2 seconds. Coppell needed a strong race from Caswell and he did not disappoint. “I am very proud of Evan for his consistency in races throughout the season,” commented Head Coach Nick Benton.
Sophomore Andrew Mullen ran an incredible race, clocking in at 16 minutes, 24.4 seconds. He finished 13th overall. A finish that would have sent him to the state championship as an individual, if the team had not qualified.
Seniors Rith Bhattacharyya (21st, 16:35) and Colin Proctor (41st, 17:08) also had strong showings on the hilly rough terrain. Rith and Colin held the team together and led the less experienced sophomores. There were 135 competitors on the course which made this the biggest race Coppell has competed in all season.
Sophomore Blaine Warner (59th, 17:32) rounded out the point scorers for Coppell. Sophomores Kavin Chengavarayan (17:59) and Vedant Bhattacharyya (18:20) also took turns holding the important 5th finisher role for Coppell and pushing each other on throughout the race.
“The Regional Championship was a true team effort and the depth in our program paid off. Everyone fought to get to the State Championship,” said Coach Benton. “Continuing to have representation at the state level with the Coppell Cross Country program is something I’m incredibly proud of.” The 6A state championship will be held at Old Settler’s Park in Round Rock on Tuesday, November 24.