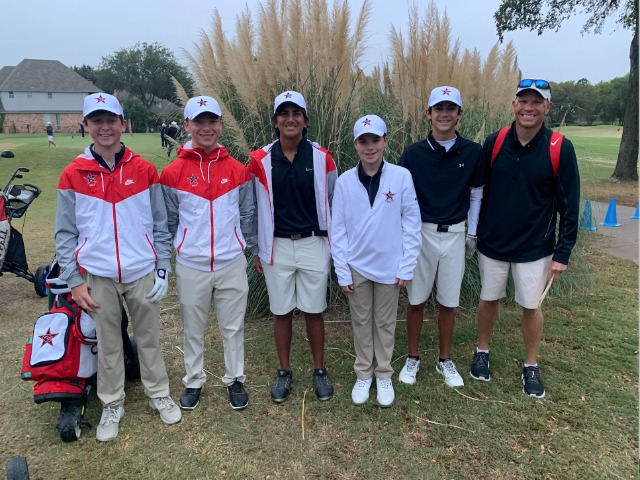 On Monday, October 19th the Varsity 2 Boys Golf Team of Justin Krawczynski, Jai Patel, Jacob Garcia, Max Scott and Sam Perkins competed in the Timber Creek Fall Tournament at Iron Horse Golf Club. As a team the boys shot a score of 335 and finished in 3rd place in the team standings. Freshman Jacob Garcia shot the low score for the team with a 77 earning the 3rd place individual medal. Freshman Max Scott finished as the 7th place medalist. Other scores include Jai Patel with an 86, Sam Perkins with an 89 and Justin Krawczynski with a 91.

On Monday, October 12th and Tuesday, October 13th the Varsity 1 Golf Team of Andrew Chow, Rithvik Shroff, Alex Ahn, Granger Hassmann and Tyler Frederick competed in the Burleson Centennial Southern Oaks/Hidden Creek Tournament. On Day 1 the boys played at Southern Oaks Country Club and had a tough day due the challenging greens and windy conditions. Rithvik Shroff led the team with a score of 79. Granger Hassmann turned in a score of 80, and Andrew Chow, Alex Ahn and Tyler Frederick all recorded scores of 82. The team finished day 1 with a team score of 323 and found themselves in 3rd place behind Allen and Flower Mound.

On Day 2 the boys came out to Hidden Creek Golf Club much more focused and played well on the narrow and unforgiving Hidden Creek course. Andrew Chow bounced back and improved from his day 1 score by 8 strokes turning in a score of 74. Tyler also had a great round turning in a 77. Rithvik carded a score of 78. Alex Ahn finished with an 82 and Granger Hassmann turned in an 86. The team finished the day with a team score of 311 which allowed them to jump Allen in the team standings and finish the tournament in 2nd place. Andrew Chow finished in 7th place in the individual standings, Rithvik Shroff followed in 8th place and Tyler Frederick finished in 10th place.

On Wednesday, October 14th our JV2 Team of Nick Heffernan, Zach Nerren, Raj Nallanthighal, Tarun Anand and Sam Kadane competed in the Jaguar Invitational at Lake Park Golf Course and placed 3rd as a team shooting a team score of 322. Sam Kadane led the team with a score of even par 70 and finished as the first place medalist. Tarun Anand scored a 76 and finished as the 3rd place medalist. Nick Heffernan continued to improve and shot an 84. Raj Nallanthighal carded a 92 and Zach Nerren turned in a score of 94.