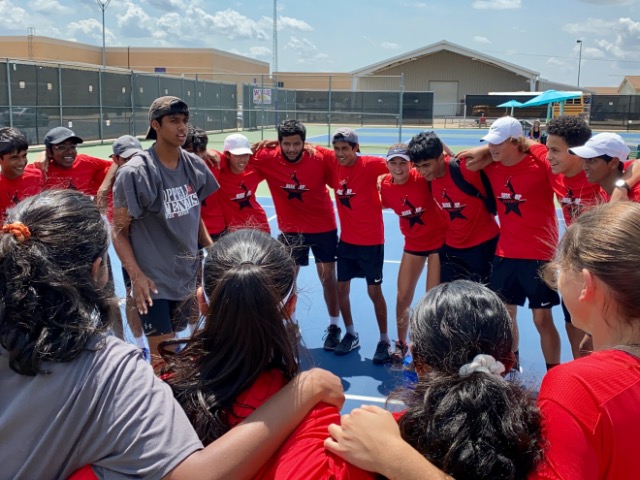 The Cowboy tennis team had to reload this season after graduating 6 of their top players. So, starting the year with a handful of starters injured made their early matches challenging. The team started the year facing some of the best competition the state of Texas has to offer. Their first 6 matches included: Abilene, Abilene Wylie (#2 in 5A), Southlake (#5 in 6A), Lake Travis (#3 in 6A), Keller (#11 in 6A), & Katy 7 Lakes (#13 in 6A). The team took several losses, but was improving with each match. Friday night the Cowboys finally had almost all of their players healthy, and their hard work paid off as they played their best tennis of this young season defeating a solid Jesuit/Ursuline squad 15-4.

The doubles combinations of Lakshana Parasuraman/Nandini Thallapareddy, Sarayu Thallapareddy/Zahra Shaikali, and Atharva Nijasure/Sayon Nath all pulled out third set tie-breakers to lead the team to a 6-1 score after doubles. The team then cruised through singles, only dropping 3 of 12 matches to complete the contest.

The Tennis team is 2-5 and currently #12 in the state. They open up district play Tuesday afternoon at home against Plano Senior High.