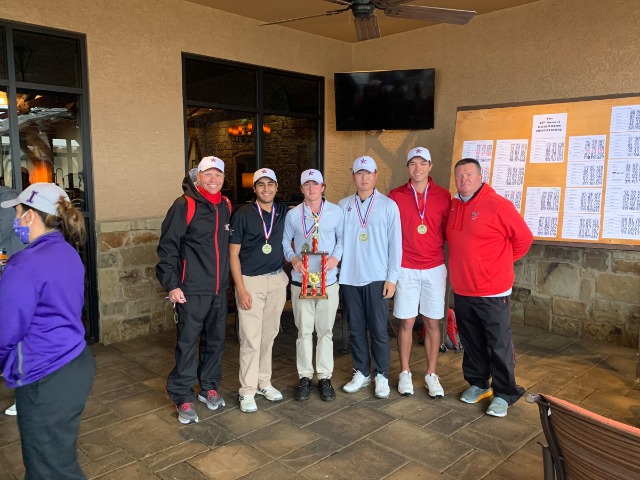 On Day 1 the Cowboys took control of the tournament with a 1 under par team score of 287. Sophomore Rithvik Shroff led the team with an outstanding 5 under par performance, turning in a score of 67. Zach Frazer also went under par with a score of 71. Andrew Chow recorded a 74, and Alex Ahn and Granger Hassmann each carded a 75.

On Day 2 in foggy, rainy conditions all day, the Cowboys repeatedly turned away challenges from both the Keller and Flower Mound teams to finish with a team score of 290. Andrew Chow led with a 2 under par performance of 70. Zach Frazer repeated his day 1 score of a 1 under par 71. Alex Ahn turned in a 74 and Rithvik Shroff recorded a 75. The two day team total of 577 was two strokes better than 2nd place Keller and 7 strokes better than third place Flower Mound. Zach Frazer finished as the 2nd place medalist with two day score of 142, and Rithvik Shroff finished as the 3rd place medalist, also with two day score of 142.

The Varsity 1 Team will compete again on Friday, March 5th and Saturday, March 6th at the Region 1-6A Preview Tournament held at Tangle Ridge Golf Club.