EXCEPTIONAL PERFORMANCES BY SWIM AT THE 6-6A DISTRICT MEET 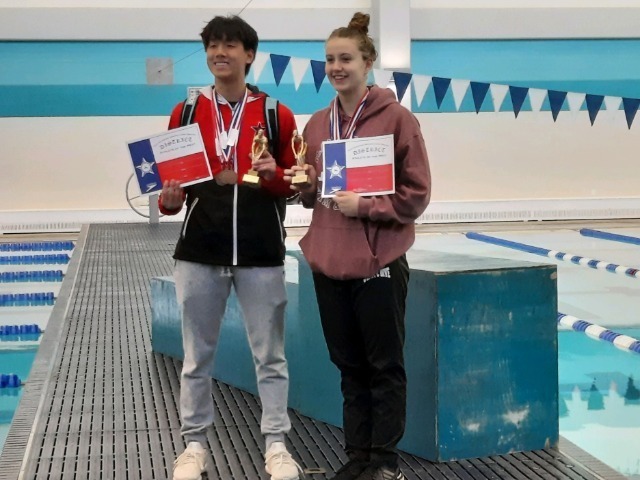 The Coppell Swim and Dive team is sending 15 athletes to regionals after an incredible team performance at the 6-6A District Meet on January 21st at Westside Aquatics in Lewisville. Final team placements were boys 2nd with 127 points, girls 4th with 75 points Records were broken in the Girls 200 Free: 1:54.72; Boys 200 Freestyle Relay: 1:28.99. The excitement started in Event 2 where the Boys 200 yard medley relay team of Arjun Baindur, Sean Li, Jonathan Ting, and Gabriel Campos finished second behind FlowerMound with a time of 1:37. 30. Team member Sean Li also placed third in the individual 50 yard freestyle, 1st in 100 breaststroke, and crowned district swimmer of the year for gaining the most points. While Jonathan Ting was second in the individual 100 yard butterfly. And Arjun Baindur took 3rd place in the 100 backstroke. Coppell had their first win in very next event, the 200 yard freestyle, in which Katelyn Jost beat the rest of the field by a full second with a time of 1:53:38, breaking her own record. Katelyn would later also win the 500 yard freestyle at 5:01.65. Freshman Gabriel Campos secured another win in the boys 200 yard IM with dominating time of 1:55.49, more than three seconds ahead of the field. Annie Chang then came on the scene with a second place finish in the 50 yard freestyle at 24.15 later placing 2nd in the 100 breaststroke . Annie Chang also led off the girls 200 yard freestyle relay with Belen Campos, Cynthia Zhao, and Katelyn Jost that placed third with a time of 1:41.12. The loudest race of the day was Coppell's win in the Boys 200 yard freestyle relay as Sean Li passed two swimmers in the anchor lane to help the relay team to victory with a time of 1:28.55. Relay team consisted of Gabriel Campos, Nathan Kim, Jonathan Ting, and Sean Li. Nathan Kim's third place in individual boys 100 yard butterfly was also a notable performance. Coppell swimmers showed off all of their hard work this season with a second overall placement at District. District is the first of three end of season meets that Coppell hopes to place well in. Boys records were broken, multiple girls records were broken, and almost every race was a new best. Many of our swimmers had their last meet here, and performed like it. Many tears were shed with best times, and lifetime last swims.