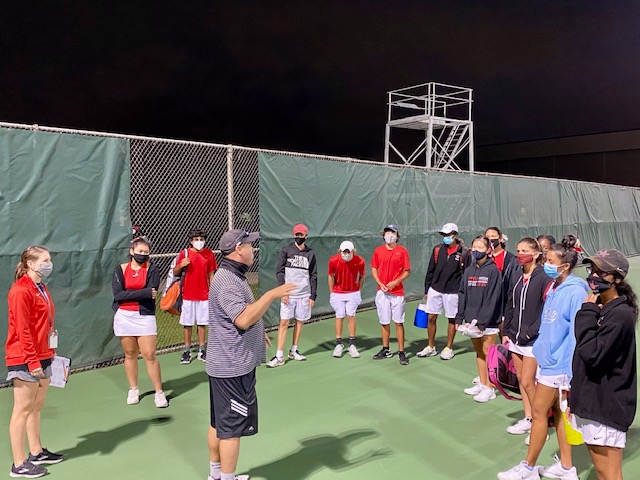 The Coppell High School tennis team pushed their record to 7-2 (5-1 in district 6-6A) by defeating Plano East 11-8 Tuesday night. The Cowboys were dealing with several players missing from the girl's side of their lineup, but Meghana Ambati, Isabelle Beach, and Sumita Bhattacharyya stepped up to the challenge and came through in a big way.

The Cowboys led 4-3 after doubles with all 3 boy's doubles teams winning (Matthew Abbey/Vinay Patel, Kunal Seetha/Austin Gregory, & Cason Cole/Atharva Nijasure) and girl's line #1 (Rishita Uppuluri & Nandini Thallipareddy) taking their match in a third set tie breaker. In singles the Panthers scored an upset at line #5 leaving the decisive match to the girls side of the lineup. Nandini Thallipareddy and Sumita Bhattacharyya both came through in their matches at lines 3 & 6 respectively.

Next up the Cowboys celebrate senior night next Tuesday when they host Flower Mound in their last regular season home match.