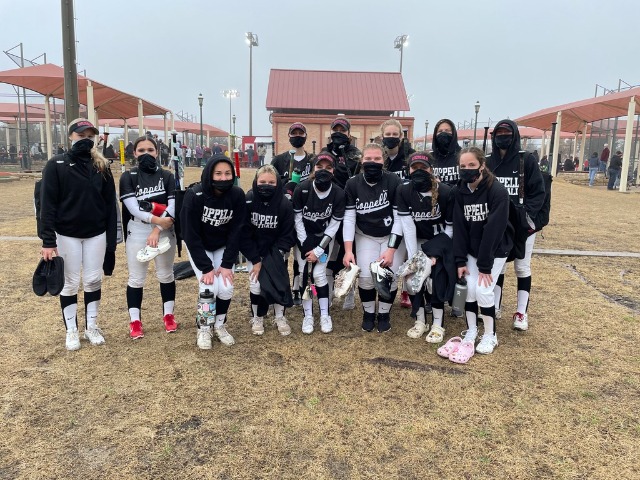 Cowgirls finish 5-0 and win the Allen Tournament despite, rainy and wet conditions. Here are some highlights from the tournament:

We had four girls hit .600 or above this weekend including:
Sydney Ingle
Michaella Baker
ElleBelle Zimmerman
Dafne Mercado

We had four more girls hit .500 or above this weekend including:
Reagan Stange
Adrianna Erichsen
Adelyn Wilson
Laura Boylan

Michaella Baker had 2 home runs (including one grandslam) and 6 hits and 9 RBI's overall for the weekend.
Dafne Mercado with 1 home run and 9 hits, 4 doubles and 12 RBI's overall for the weekend.
Adrianna Erichsen had 2 doubles and 1 triple.
Reagan Stange 1 double and 1 triple.
Sydney Ingle with 12 hits.
Medleigh Danchak with 2 doubles as well.
ElleBelle Zimmerman and Katherine Miller with 1 double.

Overall hitting this weekend, the girls were able to stick to a solid approach and everyone was seeing the ball really well with a combined 56 runs scored over the weekend and only 17 allowed.

The Cowgirls saw a great defensive effort throughout the weekend despite the wet turf. Katherine Miller had 25 strike outs in 19 inning pitches. Michaella Baker had an ERA of 1.75.

Great weekend and great effort by each and everyone of these players this weekend! Come out and support the Cowgirls in their first district game this week against Plano Sr. at Plano Sr on Tuesday.